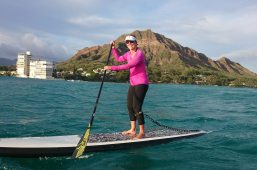 Peggy King has put in the training and downwind miles needed for the downwind racing season (photo credit: Jeff Chang)

July 12, 2014 – Peggy King will be on the  starting line ready for the Maui to Molokai SUP race. This event, which begins in Honolua Bay, covers a stretch of water often described as “The Best Downwind Run On The Planet.” With her 60th birthday in the rear view mirror, Peggy King’s M2M training had been well-planned and solid. She feels ready for her second solos M2M. 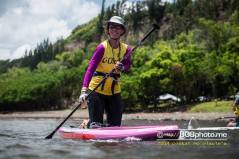 I ran into Peggy at the start of the 2014 Olukai Ho’olaule’a. She looked fit and with 20 fewer pounds on her lean frame she was an inspiration to me! Curious about her training (and ready for some lean muscle and more endurance) I asked her to share some details.

Peggy King’s Training Summary:  My training for this event was planned and actually started way back in September of 2013. My main focus was on improving my overall fitness and accomplishing some weight loss( 20 lbs since July 13!) The strategy included attending classes at Crossfit Upcountry Maui 3-4x per week.

I am not a nutrition expert, I simply used common sense. For example, my diet plan began with the eradication of a favorite –  Triscuits and cheese. It was the start of a few habits changes that made a big difference. Diet was rounded out with meats,veggies fruits, and what we all know is important, less sugar, processed food, and alcohol. Portion control is the magic.  Athletes need water – so I was more conscious of that. 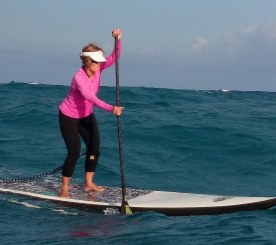 My XFit class formed a training base that I supplemented with SUP surfing, uphill walking with my dogs, and some double exercise sessions to mimic the time and intensity of  e what is required on a double Maliko Run.  It was important for me to include scheduled rest days! When I’m tired I overeat, am clumsy and risk getting hurt! Noooo! I do not want an injury.

Falling during the M2M not only wastes a lot of time, but also energy. Paddling upwind into a body of water in the nasty wind is important- and a skill required for M2O( I’m not doing that one!) and M2M.  After paddling 26 + miles of open ocean when you are tired it is necessary to have a solid base of skills and endurance. 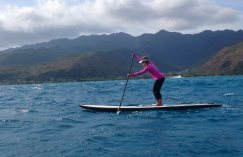 Jeremy Riggs has helped me with my down-winding and paddling skills for 2+ years now,”being my chaperon” when conditions were really windy and nasty. As a result,my confidence has improved tremendously. I also sought out some wonderful coaching on my paddle stroke from David Kalama. I love and respect both these guys so much!

Since paddle/ downwind season has started, I’ve been challenged with the tiredness overeating/ training syndrome,but it’s getting better as my body adjusts to this workload! This is not easy for a 61 year old post menopausal broad like me.

I’m feeling both anxious and excited now as M2M approaches. I want to improve my time and qualify as a finisher sooo bad. They let me through last year at 5:34 although  I fell a lot the last 5 miles. I did a fair race. This means I didn’t cheat by going to my knees or sitting down.

I am much more prepared mentally and physically this year. Who knows what the conditions will bring. It could be light or 45 mph! I could be “yard sale” falling across the channel! I’d like to think with all my training and weight loss I’ll do better than that! Fingers crossed and hope for the best.”

We wish the same for you, Peggy!  (Note from Elder SUP- I have taken a clinic from Paddle with Riggs and you can too! Launches your skills to an entirely new level)