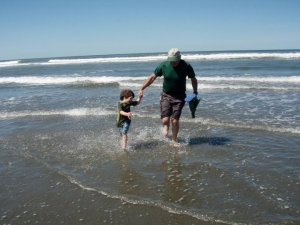 A sense of wonder keeps us young

If you met my friend Steve on the street you might not imagine what sense of wonder the guy has.  He’s close to age when Medicare kicks in, he’s got that gruff sort of look (until he smiles!) and he’s driven to climb, ski, kayak, hike, bike, explore and live every day to its maxed out most. But he’s kept an amazing sense of wonder as he’s out in the world. The latest sport to join the quiver he and wife, Laurie, have amassed is standup paddling.  On his way to ski (Mt Bachelor on July 1) he recounted this story of “wonder!”

“Where we live on Puget Sound there are only a few times a year when we get a minus one or two foot tide. When that happens there is a “reef” area that becomes exposed. We have kayaked there many times, so last week was the first time we used our standup paddle boards to go out.  It was amazing! The water all around the exposed reef was crystal clear and you could see thousands of little marine critters.”

OK – that last phrase was the “wonder” clincher. You can’t fake astonished wonder and Steve was all about it! His voice and tone were so cool! Dare I say, “wonder-ful?” Here’s a guy who has heli-skied, kayaked awesome areas all around the Pacific NW and Alaska, has hiked some of the most beautiful trails in the world from Patagonia to South Sister. He and his wife Laurie have climbed the entire Monkey Face from bottom to top – and a bunch of teeny marine critters or running in the little waves with a 3 year-old still invoke wonder! He’s out in a sound not 15 minutes from his home and suddenly, in his words, “I saw it all from a new perspective by standing up on my board.”

What’s filled you with wonder during a time you’ve been perched on your fresh perspective because of SUP?  Share your stories and blogs, pictures and video – we’ll link them to this page for all to enjoy.