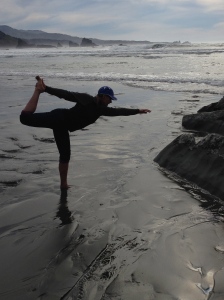 Balancing with the power and pounding of the sea almost 360 degrees around the SUP perspective is fresh and exciting – even without a paddle.

For months I had been planning all day every day paddling and SUP surfing during our “Great Winter SUP Trip.” Today is day 7 and the boards remain in their bags – two Naish Hokuas and two Naish ONEs,  Strangely, we have enjoyed some of the coolest waves. Instead of connecting with the force and beauty of the ocean underfoot while skimming its face, the waves have been all visual and full of the crash-pounding melody that calls us all to the sea.

We have gone to Pacific City for a long weekend and spent the full 3 days on the beach in and out of the water for surf sessions and paddles along the Nestucca River. In a week in the southern part of Oregon coast in the winter we have seen 2 surfers – and not a SUP water-person at all. Yet we feel more connected to the sea than ever.

Yesterday we took the hike from the view point at Cape Sebastian down a switchback series to a fork in the trail. In one direction was the hike to the beach – beautiful, for sure.

But we also took the fork to a series of rock outcroppings that rose 50 feet out of the water and about 500 feet into the ocean. Canyons filled with waves offering 10 ft faces. A lone gray whale rolled and blew as it rolled and dove not 150 yards from us. On the trip down south, these giant mammals head on a direct course, move quickly, and mostly stay about 5 miles offshore. Coming back, the whales travel much more leisurely and stay closer to shore—within a half mile is not unusual. We feel lucky to have spotted our lone whale.

The feeling of sitting on a precarious rock outcropping and waiting for the large set waves was so similar to standing on our Hokuas and waiting for a sweet set wave to ride.

In fact, because the entire process of waiting for waves and standing in awe of their magnificent power was all about the wave – not about our ride – maybe it delivered us to a closer tie with the waves we love to experience.

Later that evening we sat by our fire and watched the sun sink in a sea of light pink and peach – almost a shadow of the night before when it was a fiery explosion of color, almost celebrating the end of the storms.

Ed and I have been heading to the sea in sailboats and on surfboards since 1965 – and he has never had the inspiration to stand in a perfectly executes “Mountain Pose” in front of a magnificent ocean environment. We never tired of waves crashing against the solid, grounded magnificence of the many rock formations on this coast.

We should be all bummed out because we didn’t have the surf and paddle trip we planned – but we are NOT! Instead, perhaps we have never appreciated the gift of experiencing the sea and its beaches like we have this week – right in the middle if what is usually our gray, snowy winter.

Surf is where you find it – thanks for that, Gerry Lopez!