Jane McKee hails from Santa Barbara where she graduated from UCSB in 1982. A decade later she started paddling outrigger canoes. Jane picked up her paddle and never looked back. Now living in Honolulu, HI.Jane’s results speak for themselves. 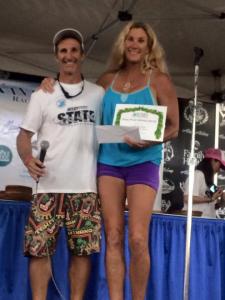 We are very fortunate to have some solid insights into the demands of SUP and training tips (article here). For now, hear more about Jane’s transition from racing OC-1 to SUP.

In Jane’s words, “I started paddling outrigger canoes in 1992, in Santa Barbara, California. It wasn’t until the late 90’s, when the ultra-light racing OC1 canoes came out that OC1’s were used for more than just cross training. The new lighter materials made one-manning FUN! And so the winter one man season was born. Historically in Hawaii the off season racing was predominantly for surf skis. 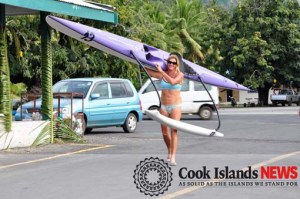 Now a whole new opportunity opened up for people to stay in shape in the off season on a craft that was significantly easier to paddle than a surf ski. I took advantage of this and started racing the winter series and have been doing so for 15 years. That is 15 years of paddling year around. It vastly improved my OC6 performance, as I was coming into the 6 man season in as good or better shape than at the end of 6 man. Gone were the days when you used the 6 man season to get in shape. It totally raised the bar in the paddling world, and people caught on quickly. 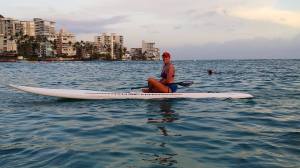 I have been blessed to have had wonderful coaches and trainers, and over the last 13 years have won the Hawaii State Championship 4 times on the one man, and took 3rd overall in the Molokai to Oahu One Man solo race. I definitely excel in the bumps and downwind runs, my motto being ‘the bigger the better’. So when a friend told me I should try stand up paddle board racing, all I could think of was slogging through flat and hot conditions. And going slow. I am a self-proclaimed speed demon, half race horse and stand up paddling didn’t seem very exciting.

Then a friend took me on their unlimited board on a downwind run. I got my first long run on a swell and I was hooked. You can go FAST on a SUP? I’m IN! So last August I bought Armie Armstrong’s used V1 Bullet after his Molokai race and started training. I still wasn’t 100% sure I was going to like, so the price was right. Five months later I had SIC built me a brand new V1 Bullet and I absolutely love it.” 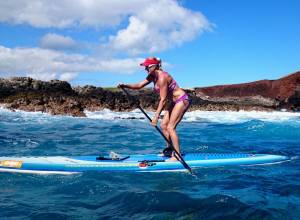 Jane’s story of the race: So the big day came, and the conditions were perfect. The course was Hawaii Kai to Magic Island, an 11 mile run with the last 3 miles across Waikiki (flat). By the time I had reached Diamond Head I was in third place overall, both men and women.  It was only at the final turn buoy I was passed by three of my guy friends but we all finished within two minutes of each other, so I was really pleased with my performance and time: under two hours. So I have one more State Champ under my belt, but in a completely different discipline. I guess you can teach an old dog new tricks after all!

Next up is the Pailolo challenge which is Maui to Molokai, and then the Olukai race where I will race both SUP and OC1. And who knows, maybe Molokai next year? Anything is possible if you believe in yourself.