I recently had the absolutely joy of watching the “Progression Project” film   Nine of the world’s top SUP surfers hit the waves with Erik Antonson of PaddleWoo. Antonson is responsible for some of the most progressive media in paddlesports, producing free content via his PaddleWoo podcasts and blog posts to help expose and advance the industry. The Progression Project documents nine of the world’s best standup paddle surfers in Costa Rica showcasing the sport in its most progressive form in one groundbreaking SUP film. Left to right in the photo above: Sean Poynter, Caio Vaz, Ian Vaz, Kieran Grant, Fisher Grant, Zane Schweitzer, Giorgio Gomez, Erik Antonson, Mo Freitas and Noa Ginella. (Featured Photo above: Chandler Williams/Modus Photography)

The film is now available at no charge online. Erik explains why he is offering the film for free, “My hope is that by releasing it for free, we get some curious surfers to watch the film and realize there is so much more in paddle surfing than they realize.” A brilliant way to bring understanding and mutual respect out on the water.

The film hit home in so many ways.Let me start with a totally unrelated story – the first chair lift ride of my ski season at Mt Bachelor this year. We were heading up with a snowboarder talking about skiing vs boarding. Since the guy did both, he was balancing his joy in each sport as both different and very good. One statement he made about skiing, just an off-hand comment, changed my entire season.

Just like the guys in the Progression Project film talked about small things they learned from each others style and technique away from competition, the guy shared one insight and it made all the difference for me. He simply said, “I love that feeling in skiing when you initiate a turn with your toe and move to mid-foot, then the turn locks in so easily.”

He might have said more, I don’t know, because that one statement stayed with me. I didn’t think I was much aware of the exact mechanics I engaged when initiating a turn – so many things to think about. But that one statement, stuck and my technique and level of fun on the show has soared this season. 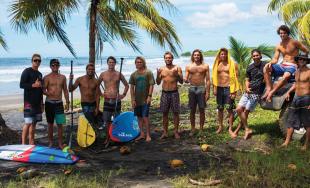 In the “Progression Project” film again and a again each of the water athletes is interviewed and each share what they observe, respect, appreciate and can analyze from the very people they perform against in competition. One small thing, one observation could bump a skill up a level. It was great to experience the camaraderie and fun these elite athletes maintain. The shared respect for each other and for their sport – and the most amazing SUP surfing footage you’ll enjoy again again – make this a unique and special project!

A huge “mahalo” to that guy on the chairlift! And to all the athletes in the Progression Project. I may have even subconsciously picked up a SUP surfing tip, too.