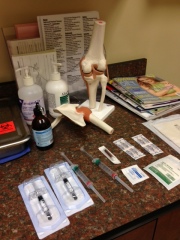 As March delivers more daylight and some warmer weather, we’re back on the water more often these days. Having survived this much of ski season with knees in pretty good shape, it was a surprise when I managed to make them sore when paddling. As a precaution, since a few meniscus surgeries indicate I have very little cushion and some arthritis in the old knees, I had some injectable medication called hyaluronan delivered. It is a once a week procedure over 3 weeks (ouch!)

Using some GoPro footage (which should be done again from the back-of-the-paddler view) I was able to share my technique with some experts kind enough to provide suggestions.  I tired out the very good advice from Karen Wrenn, Naish team rider,  over the weekend.  With knee braces on, a more narrow stance and full attention on keeping my torso rotation a bit higher toward the upper ribs I had a great time!  The entire process of awareness and concentration almost made me miss the awesome sun on water and mild breezes, but not quite.

Keeping my knees tracking more forward really seemed to make a difference in my ability to “drive power through the board” for consistent acceleration. Karen mentioned that I might expect more after exercise soreness in the upper ribs area when i was getting the rotation closer to what might be ideal. I can vouch for that – in a good way.

Bridget Fitzpatrick Evans joyfully shares yoga with us bright and early in the morning.

Even greater reinforcement of how a body could be gently nudged toward a new (and hopefully, better) technique came with my 6 am yoga class at Groove Yoga Bend this morning. We were going through our moving-breathing-meditation led by Bridget Evans and we were deep into Warrior Two when I noticed a light “coaching” toward moving hips to the side as arms pointed forward and back. With another barely noticeable touch, Bridget coaxed my thigh to bend just a bit more toward parallel with the ground – and “LIGHT BULB!”

It might have been 1/16th of an inch more of a torso rotation, but I caught a twinge of that upper rib exertion from the paddling and my hips moved a bit more – and there was the reminder. If patience and awareness team up, even a tough old body can learn to move in new (and more effective) ways.  A little shaky and really sweaty insight.

Later as we moved into single pigeon, I babied my left knee and did a variation on my back. My cooler and healthier right knee found its way into the pose a bit easier.  Breathing in and then breathing out and deepening the pose I was feeling really good about how it was all settling in. Maybe Bridget noticed some tense areas that were holding me back – who knows. Whatever, she appeared at just the right time and managed to relax some large back muscles, some teeny neck muscles and gently coax a bit more deepening of the stretch.  Wow! it was such an easy transition, and reinforced hope.

Consistent practice and listening to one’s own body – partnered with professional advice – can make training an adventure and a journey.  I guess the take away is paying attention – what do you think?  We welcome your comments, e-mail and insights.