The very first time we drove the gnarly rock-rutted, puddle pitted 5 1/2 miles from the Todd Lake parking to the Broken Top trail head we feared for our car chassis. The hike was so incredible and the views spectacular enough that we returned several times every summer. The first time we scrambled up the scree that framed the waterfall  cascading from the snow-fed “glacial” lake we called, Secret Lake, we were hooked.

At that time in 2002, we hadn’t discovered standup paddling so our only venture into the lake was a tentative wading. Immediate frozen feet made that a short-lived experience.  By 2006 we were avid SUP athletes. That lake became our holy grail of “coolest place to grab a photo paddling.”

It wasn’t long afterward that we saw this photo of Eli Odegaard landing in the June issue of Men’s Journal. Professional photographer, Tyler Roemer shot this up on the backside of Broken Top sometime late in the summer of 2012. According to Roemer, “It was a mission getting that clunky SUP board back there but somehow we managed it.

We hesitated about hiking in with our standup boards until we finally had the answer to every SUP-adventurer’s dreams. We purchased two Naish ONE inflatable boards. The boards come in their own backpack, with a great pump – ready to be packed into almost any place you might dream of paddling. 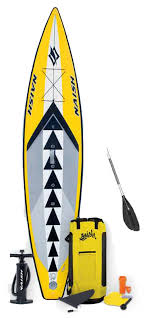 Once racing season was coming to an end, Ed and I took the drive in to the broken Top trailhead and on a stellar October Saturday we hiked with our Naish ONEs up to the “secret lake” by Broken Top.  The short video below documents the trip and the BIG SURPRISE we found at the end of our 2.5 mile trek to the lake. Where will YOU adventure with YOUR Naish ONE (or other inflatable from Naish?)