If you have ever hopped off the ferry to Victoria, Nanaimo or any of the other stops along the coast of Vancouver Island you had to be craving some paddle time on the water.  Back in 2008, we did a “first crossing” in Clayquot Sound where local First Nation and kayak tour groups cheered and waved and asked a boatload of questions (What is that called? for the most part, then “Where can I get a board?”) 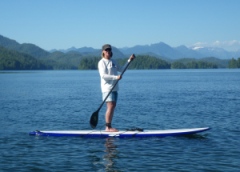 Awesome paddle in Clayquot Sound (beware of tides and currents!)

I recently spotted a picture posted on Facebook of a beautiful scenic river, partially frozen, with a long, glassy wake through crusted ice made by a guy on a standup paddleboard.  As luck would have it, I was able to connect with Paul Kendrick who created the scene via a great photo. The intrepid paddler cutting through the icy river was Paul’s friend, Darcy. If you are compelled to bundle up and paddle in winter, be safe and stay warm. 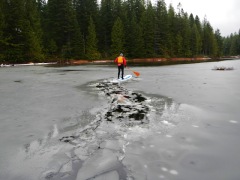 Winter SUP – paddle with a buddy and wear proper clothing (then take in the awesomeness!)

If you are intrigued by the idea of 12 lakes connected by easy portages, be sure to read this article as Paul describes his favorite rivers and lakes from the SUP Perspective.

Paul is relatively new to the sport, he bought his first stand-up-paddleboard in July 2012. A fan of both awesome adventure scenery and good exercise, it didn’t take Paul long to master the art of “boardpacking.”

What’s boardpacking? It’s a term I coined to explain how wonderful “backpacking via SUP” can be. 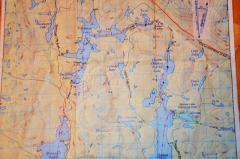 The area of Vancouver Island where SUP explorer Paul Kendrick adventures with his standup paddleboard and camera.

Paul has likely done quite a number of first crossings, as there are so few  up in his area exploring on paddleboards, Paul has a blog that’s informative and a very good read.

According to Pau, “I started this blog as a means of sharing and invitation for those who may be interested.We are so lucky to live in this very special part of the world, so let’s get out there!”

After touring the log, I am hankering to toss a few boards on the roof of the truck and head on up to Vancouver Island. Who else has some BC adventures to share? 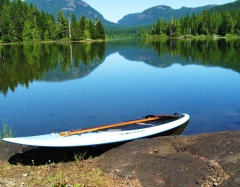