Yes, they do! In Pacific City (Your Little Beach Town) there is nothing little about their winter storms – or the fun you can have experiencing them. While there is a certain magic to summer and fall in Pacific City (read more here) exhilaration meets wonder when the rain pelts, the winds howl and surf breaks like Niagra across the ridge of tall Cape Kiwanda. 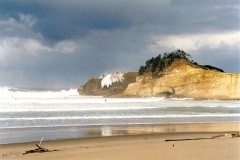 Waves breaking like Niagra over Kiwanda played with the senses – sight, sound, and salty scent

To be honest, the usual adventure of camping in and around Pacific City is not the sort of accommodations we’re talking about.  When you are heading for winter storm watching it’s time to take advantage of the best the Oregon Coast can offer.  With off season rates beckoning, this is the time to cater to all your senses. Grab friends and family and head to The Cottages at Cape Kiwanda. 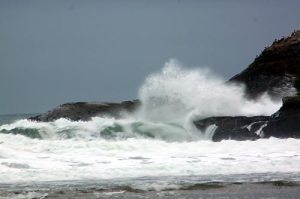 We checked in about 4 PM to a mix of wind and rain.  You know that feeling when the pool is chilly and you haven’t made the feet first plunge – committing to the eventual water-fun? We were like that.  Shivering a bit in fleece and rain gear, we began to unpack and settle in to our two bedroom cottage. Fire in fireplace – check! Soup brought from home simmering and bread in oven – check! Ahhhh, settling IN? No. The view from the large windows was too compelling – we decided to plunge right into the storm watch.

Exhilarated, we headed back to the cottage at dusk ready for the understated luxury of the cottage and our belly-warming dinner. We slept like babies in the the perfect blend of contemporary and cozy, luxurious bedding and woke ready for long beach walks the next day.

Hints: Bring your game – wifi and game systems in the cottages brought out the kid in us all. You’ll want to gather driftwood and enjoy a cozy fire on the beach. Plan at least one meal at the Pelican Pub – even though the kitchen in the cottage is appointed with top-quality everything! Local seafood and brews hit the spot after our trek to the inlet in late afternoon. 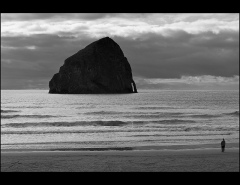 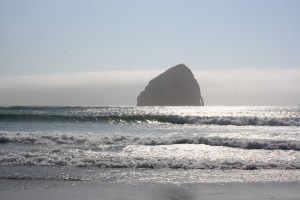 A few weeks ago a group of friends headed off to Pacific City, Oregon for one of the last summer weekends. With temperatures cooler in the easterly cities, we hoped to avoid the ubiquitous fog that generally shrouds the Cape Kiwanda shoreline. Not so – we had foggy conditions throughout the weekend. The picture to the left shows one of the big sun breaks and an average of the wave conditions. Sure, the occasional larger set rolled in. and so did the wind. The picture to the right shows the chaotic sets we enjoyed for most of Saturday. 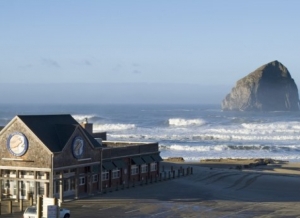 An interesting thing to note is the lack of crowds on the water. Many who came to check out the surf left grumbling about this or that, fog or wind or chill or wave speed. When we got out about 9:30 there were a few prone surfers and about 5 standup surfers. The sets were fairly infrequent so paddling out wasn’t too difficult, staying up while waiting for a wave – more so!

Looking over to the southerly side of the haystack rock, just off the south corner of the Pelican Pub, I noticed a silhouette and surf style that’s not easy to miss. It was Gerry Lopez. He’d been out long before any of us.  With ease, he’d caught dozens upon dozens of rides that made the graceful most of every wave.

The exact same waves deemed not good enough for many who’d visited the shore that day, were providing plenty of rides for one of surfing’s greatest – and for hours on end.  In the few hours I was out there honing more standing and balancing than surfing skills, I watched Gerry watch the waves. Patience to look for the right wave is not my forte, so I learned as I watched him watch. Observing his easy-powerful paddle strokes and graceful rides provided some serious lessons. On each wave, Gerry decided when to cut out of the wave to both avoid getting tousled in the washing machine shore break and to make the paddle out an easier task. Simply being aware of that important phase of riding the wave – exiting it at the right time – can save a lot of hard work.

I finally scored a wave that allowed me a very sweet ride. It seemed like so many I had missed so far, then out of the blue it held up and invited me to dig in for those last few strokes.  Once on, I let it direct me right – so easily.  Catching the second build of the shore break, I decided to end on that note and go ashore to warm up and watch some more. I was still perched on the tailgate of my truck when a few hours later a friend came in plenty exhausted. He commented on how cool Gerry was, giving a few pointers and generally bolstering confidence among some of the SUP surfers sharing the waves. The foggy, windy day warmed – maybe it was just the “aloha.’

I reflected on that surf session today at noon, oddly, while stretching into a forward fold at Groove Yoga. Instructor Cynthia Latimer was giving just the class my mind and body needed. She was bringing our breath and focus to the mat with the unique spirit she shares via her teaching I looked at my mat below my bare toes and considered if riding my breath and movement in this yoga class was really so different from riding a wave. This just right class seemed in many a bit like the ONE wave last Saturday.  Similarly, that wave was just naturally, easily right too.

My thoughts turned back to watching Gerry on some fairly mediocre waves last week riding, playing, sharing aloha with the other surfers and being in the moment. Truly living what he shares in his book, Surf is Where You Find It. Gerry explained in a recent interview that was part of his book tour,  “So I would like to say that we are all here in this life to LIVE. Life is moment to moment, if somehow one moment escapes you, if you haven’t lived it to the fullest, live the next one too. Keep paddling, keep breathing through your nose, live with aloha.”

In the moment when you get to your favorite surf beach and it is too flat, too hot, too windy or not enough of something, consider making the most of that moment.  If there is a way to go with the flow in a manner different than the agenda that brought you to that beach or that moment, consider making a considered, aware choice on how to live it.

In various studios and retreats in which Gerry shares insights and guidance through his yoga classes, you are likely to hear him say something like this, “This is why surfing is such a great metaphor for life. Life doesn’t hold still for us. If we don’t move with it, life just passes us right by, it leaves us behind. Surfing teaches you to be in that moment spontaneously, go with the flow smoothly. That’s how you get the most of the wave and it’s also how you get the most out of life. ”

At work, at play, on your yoga mat, and of course in the ocean, surf is where you find it. And being a “surfer” is what you make it.