If you’re planning a trip to Maui and thinking about shipping your SUP boards and paddle – think again. There is a great shop close to the airport absolutely full of great equipment and gear to buy or rent. The team at Hi-Tech Surf Sports is the locals’ favorite, but they share warm aloha and expertise with all who head their way.

It took the airlines losing our much-loved KIALOA paddles and all the SUP gear in our travel bag for us to drop in at Hi-Tech Surf Sports for replacements. We might have seemed a little frazzled (and upset) but we walked out of there 30 minutes later with a big grin and plans to be back. Why? 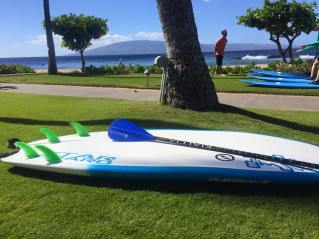 Our first question was, “Do you have Kanulock locking roof straps?” The nicest young man brought us to a huge selection and began to ask us what our surf plans were. In minutes he learned our skills and what we like to do. We mentioned that our gear was lost by the airlines, and he had a few great solutions in mind. We promised to be back the very next day. 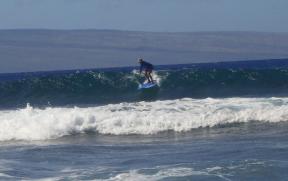 Sunday dawned sunny with a small swell at Launiupoko, so we sped over to Kahului arriving just as the shop opened. Again, super knowledgable staff took us under their wing helping us with board selection. Ed explained that he wanted a stable board but one with the ability to be fun in small waves. He got the Starboard Wide Point 9’5.”  After a little chat the staff decided that the Starboard Hyper Nut 8’0″ would be best for me.

WoooHooo! They were spot on for me. What a blast that board is.  The waves demanded a late take off and the Hyper Nut was so forgiving. I’m just a fun-loving surfing grandma, but I was scooting up and down little wave faces like nobody’s business. 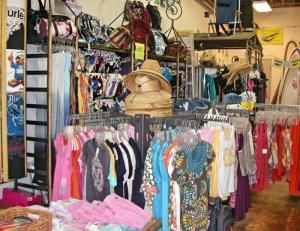 Endless selection of apparel and accessories

When the waves changed we were able to swing back into Hi-Tech Surf Sports to exchange Ed’s board for one better for the new conditions. Not only did they switch out equipment happily, they took the time to listen to our stories and to share some of their own. Local riders are in and out of the shop all the time. Our experience was enriched because we felt like Hi Tech was now “our” local shop too. 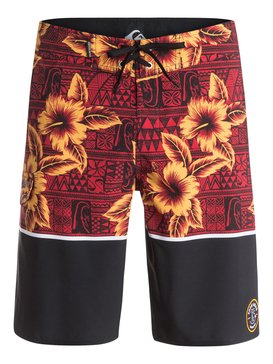 Enjoy trying the newest equipment, different equipment than you might own, and feel the aloha! And the prices are right! And not to neglect a mention of the HUGE selection of apparel and accessories in the store. Ed scored the newest Eddie Aikau Quicksilver boardshorts, I jumped for a cool Roxy rashguard for new baby granddaughter – and the cutest “mermaid” onesie. I told you I was a grandma!

I have been to a lot of book signings – usually taking place in a bookstore with the author cooly reading from their newly released book and then quietly signing your copy. That’s not how it was done by Suzie Cooney, the SUP trainer to Maui and (lucky us) the world beyond. What a fantastic event she hosted for us all. 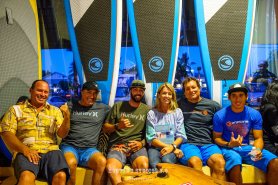 You’d expect the author to “talk story” at a book signing, but the entire group of happy guests all had the story-telling knack – and so many stories to share. We arrived at Adventure Sports Maui to a buzz of happy energy. Suzie greeted us with hugs and a quick introduction to Milton Kalani Martinson Dave Kalama and Loch Eggers.

Everyone had “Suzie” stories to share – how she inspires, encourages, trains and simply makes the world a better place.

Milt added to our (already great) experience at the recent Pe’ahi Challenge. As one of the jet ski support for Kai Lenny he was right there in the impact zone safely bringing Kai out, along with Ola. Even as Milt was working with Kai a few days later, Milt was available to help when another athlete’s boat capsized. And on the drive back to the harbor, he spotted a kiteboarder with broken equipment and in deep trouble. All in a day’s work, Milt picked him up and delivered him safely to shore. That’s how the event played out – much aloha, friendship and fun. 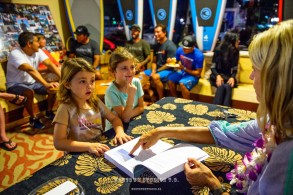 We did our first little fun race on Maui with Suzie almost 5 years ago and have been down wind crazy ever since. That includes doing a clinic with Jeremy Riggs  on the Columbia River. Jeremy is full of expertise – best of all are his stories of taking his girls out on the ocean inspiring the next generation of ocean (and cookie) lovers.

Speaking of food “da grindz” Suzie shared with us all were – as we heard people saying – “onolicious.” That’s the way Suzie rolls. At an event to celebrate the launch of here comprehensive and incredibly valuable training book, Suzie made it a party to celebrate every one in attendance and to thank all who encouraged and inspired her along the way.

Get YOUR copy of HOW TO INCREASE YOUR STAND UP PADDLING PERFORMANCE and get ready for new levels of skill for any level paddler.

The air was electric with anticipation, the athletes quietly checked equipment as the rhythm of swell surging in Kahului Harbor reinforced the truth. While one water athlete would reign victorious by the end of the day, each knew the true opponent was a wave named, Pe’ahi. There would be no beating her, only the chance to be patient enough to wait for her to deliver the right wave and then ride it with a lifetime of experience blended with courage and focus. 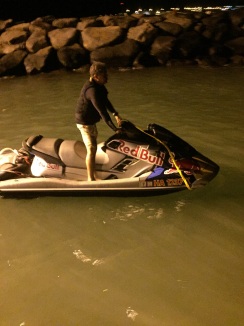 In the pre-dawn darkness we arrived at Kahului Harbor as the boats and jet skis were being launched in preparation for the first paddle-in event  at Jaws, the Pe’ahi Challenge. We were there to observe the pule, the traditional moment of prayer shared by the athletes as they gather in a circle offering their gratitude, asking for safety and protection, blessing the endeavor they will experience today. One image comes to mind.

One of the competitors emerged from the cabin of his boat with a handful of ti leaves. Traditionally ti leaves are used in ceremonies for protection and to call in good luck and spirit. The young man shared the ti leaves with drivers of the jet skis, the link to safety for the athletes. No words were needed, the jet ski drivers knew their role was crucial and one that was built on training as disciplined as that of the athletes. 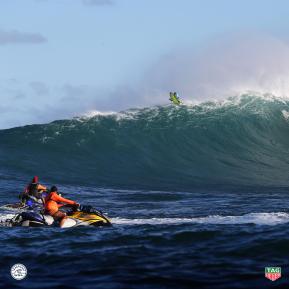 One by one the boats headed out for the long ride to the deep channel just off the shoulder of Pe’ahi. We had the good fortune to be on the cliff with a bird’s eye view of every ride. Within earshot of the spot-on commentary and “talk story” gift of Dave Kalama, we were fully immersed in an epic day that will go down in history.

Before the comp even started, Kai Lenny caught what looked like the best wave of the day, a huge barrel, moments after Shane Dorian’s monster drop. Kai’s wave was caught on camera but from a distance. People continued to remark throughout the morning that it was easily the biggest and deepest (made) barrel they had seen. If you want to see the footage, FOLLOW Kai on Instagram – and prepare to be blown away by that video.

With near-perfect Jaws conditions, the best big wave riders on the planet were queued for heats and a chance at the the wave of their life. Yes, there was a hefty purse of $100,000 – but at the moment the laser focus was on the swell, on the power of Pe’ahi. Before the event even started, things got crazy. Mark Matthews took off on a bomb and separated his shoulder. Every ride had a price tag.

The predicted swell delivered with power and resulting carnage that had every spectator holding their breath until the athlete popped up out of the churning foam and grabbed the rescue sled. Commentator, Dave Kalama, explained that after a crushing wipeout the full focus is on getting a board (in so many cases the board has been splintered by the impact) and getting out there as soon as possible for another ride. You have to get out there and go again before the realization hits you. What an absolutely insane path you have chosen as yours.

The day was full of rides that brought gasps, then cheers. Dave Kalama called Greg Long’s cavernous deep 9-pointer “one of the biggest waves ever paddled into.” Every heat brought incredible rides and the gnarliest of wipeouts. One of the runaway jet skis, hammered sideways by the wave, was pounded toward the rocks, then methodically smashed to bits in the crushing foam. Watching that gave each of us spectators a full understanding of the forces the athletes endured at any misstep or wipeout. Their preparation and training mixed with courage and absolute passion for what they do is nothing less than heroic.

Huge cheers erupted in the VIP tent when Albee Layer threw down some incredible tube rides. It was nail-biting good to be seated next to Peter Walsh (father of competitors Shaun and Ian).  Shaun Walsh’s steep drop, which Shane Dorian said was one of the steepest of the contest, gave us all chills. Ian Walsh’s heat before the semi-final was a collection of one strong ride after another. From one of my favorite Maui paddlers, Peggy King, “Maui Local boys ruled today and Billy Kemper deserved the win!” Right on, Peggy. 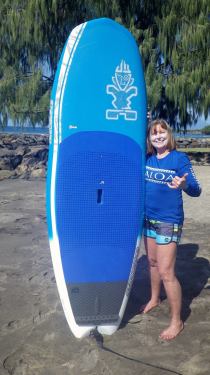 Heading out for some little fun waves at Launiupoko, Maui

The very next day we took our boards to Launiupoko on the West side for the polar opposite of waves, a gentle 2-fit swell. We always have fun at our favorite Maui beach – does what we do count as “real” surfing?

We got some insight later that day. It was really cool to read a post by Kai Lenny that made us feel a connection to one of the world’s best – simply because we hunger for time in the ocean and on its waves, “2ft to 20ft the fun is the same to me. I’m just happy to be in the water everyday!” 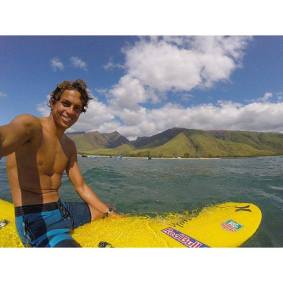 At the end of the day at the Pe’ahi Challenge, Billy Kemper won the well-deserved prize. Every competitor provided the honor of participating in this historic, inauguaral event was also a winner. In the biggest picture – we all won. Our sport is gaining fans and appreciation from surfers of all levels and non-surfers as well. Thanks to the World Surf League (WSL) and TAG Heuer for the vision to collaborate to bring us this event.